I love all kinds of cuisines! Period. I will try 99.9% of anything once. And I know I say this often, but God definitely knew I would grow up to being someone who thought about food 24/7 and blessed me with a husband who loves to eat and will try almost anything like me. About 2 years ago my friend Rebekah was helping her mom clean out some stuff for a garage sale (I think) and that is when I got my first Moroccan cookbook. I made a Chicken Tagine.

A tagine is traditionally a heavy clay pot with a flat and circular base with low sides and a top that is cone shaped. The heat gathers at the top and allows for the condensation that forms to be sent back to the base to cook the meat, etc. Tagines are used to typically slow cook stews of meats, vegetables, chicken and fish.

But since I did not have a tagine at the time I received the cookbook, the first time I cooked it in a crockpot and the 2nd time I cooked it in a dutch oven. Both came out great. Luckily though I received my very first tagine as an anniversary present from John this past year. Not only was I super impressed that he got the gift on his own (ie no help from his mom or sisters) but that he remembered me wanting one. He also said it was for selfish reasons because he wanted to try some of the food I told I him about. This dish is not only simple and healthy, but the aroma that emanates from this dish will definitely pull you in. 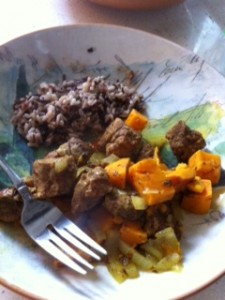