John went to Arkansas for fly fishing with some friends this weekend which left the dogs and me to fend for ourselves. Originally Mama was going to fly up and spend the weekend with us but that darn wintry mix hit us pretty hard cancelling all the flights. So what did that leave me to do? Well clean, organize, and cook of course! I got to recipe test a ton! Some resulted in minor fails and others were a huge success like my Southwestern Hash I had for dinner which you could also have for breakfast. I was craving chocolate so I decided I had to bake something. I have been making a lot of cookies lately since John loves them so much – I mean he did have a milk and cookie station at our wedding instead of a groom’s cake. At first, I planned on making my Guinness Fudge Brownies but then I realized John took the beer with him on his trip. So I looked in my newly cleaned out and extremely organized pantry (I mean I did have 3 whole days of doing nothing) and found Andes Mint. And laying next to our new French Press I saw Espresso grounds. What could be better than mint chocolate and coffee? Nothing trust me! 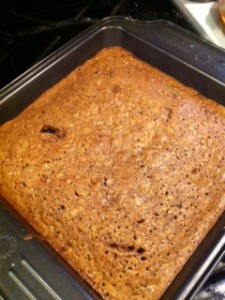